Book Reviews: Not Your Mother’s Casseroles, by Faith Durand

I am so glad to have had this book show up in my mailbox*, because I wouldn’t have picked it up at the bookstore. Isn’t it a shame that some of the greatest cookbooks don’t have more shelf-appeal? Faith Durand has assembled a wonderful compendium of one-dish meals, from breakfast, to dinner, to dessert. I’ve served a half-dozen or so of them to my family and they were all consumed with great joy. All of it. They practically licked the baking dish. Nothing testifies to the quality of a recipe better than no leftovers. 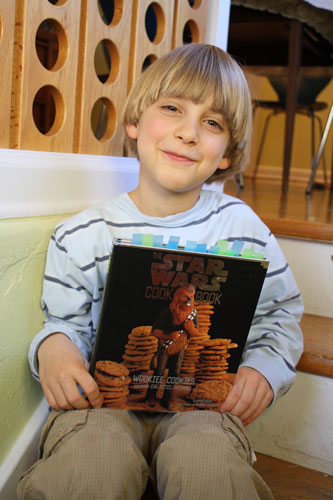 The size of this cookbook belies its hefty contents. For a book containing over 200 recipes, it is quite compact. There are no glossy photographs inside, and the recipes are printed back to back, so that some of the recipes will require page-turning. As an art-college veteran, I appreciate good design and was a little disappointed at first glance through the book. But all hesitations were lost once I started cooking.

Not Your Mother’s Casseroles is arranged according to meal and main ingredient. Most of the recipes are for main dishes (for the most part, divided according to what starch they use). There is also a chapter of breakfast recipes (perfect for making the night before), and a chapter for desserts. There is even a thoughtful chapter of salad, bread, and soup recipes to serve with your casseroles. Brilliant! 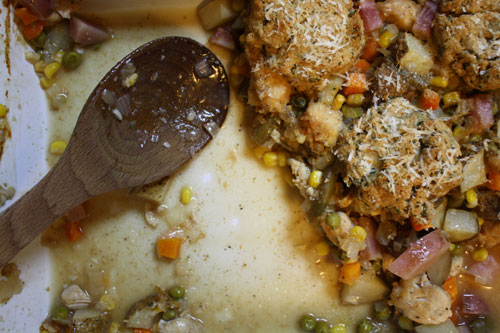 Faith Durand’s recipes use real-food ingredients (no canned cream soups!) and are super-simple. I love that she does not try to reinvent the casserole, but keeps her recipes true to the quick and simple nature of the dish. But simple does not mean bland. She expertly combines ingredients to “extract the maximum goodness from your oven.” And she even gives permission to not follow the recipes, acknowledging that much of the joy of home-cooking is found in fiddling with ingredients. While the recipes are excellent as written, they also allow lots of room for your own preferences and local selections. I love this little blurb from the introduction, that I just had to share with you here because it makes me smile every time:

“[John Thorne, author of Mouth Wide Open] writes that ‘just as the invention of the personal deodorant transformed body odor, until then a mere fact of life, into a universal embarrassment, so could casserole cookery, which impressed cooks with its unthreatening seines, make the uncertain work of preparing something pleasing from scratch seem rife with potential discomfiture. Convenience food cookery frees the cook of responsibility of the dish, and freedom from responsibility is such a delicious experience that it becomes part of the dish itself…These dishes are not what makes me want to cook.’

“What does make him want to cook? It’s the same thing that makes me want to cook: recipes that get reinvented every time I make them, with a pinch of this or a new way of cooking that. It’s dishes, as Thorne puts it, that ‘demand more from us than to be just thrown together.'”

The Sweetie Pie was excited about the number of breakfast casseroles. Breakfast is his domain, and he likes to make it special on the weekends (it makes the weekday oatmeal go down easier). He served the Autumn Fruit Strata with Apples, Pears, and Raisins to rave reviews. Perfectly browned and toasted on top, and full of custardy goo on the bottom, it was declared a winner. And he has at least 5 more recipes dog-eared for future use. 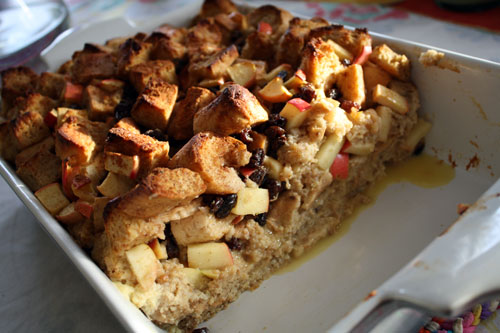 I was most interested in the dinner recipes. Since I’m still on my restricted Paleo diet and often end up cooking two dinners (one for me, one for the rest of the family) one-dish suppers that can be prepped in the morning make that task much easier. We had a tight grocery budget during the time I was test-cooking, so I opted for some of the more economical recipes. The Baked Rice and Lentils had a surprising amount of delicious flavor given its humble ingredients. And since my family is a sucker for any iteration of chicken pot pie, we tried the Lemony Chicken Pot Pie with Parsley Biscuit Crust with some veggies from the freezer and leftover Thanksgiving turkey. Again, no leftovers. 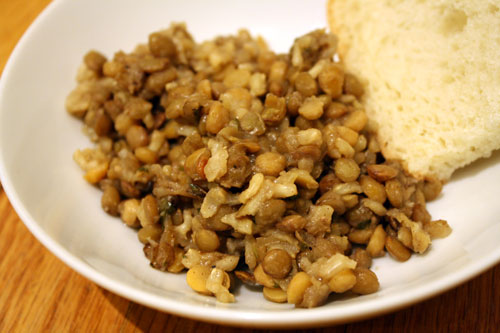 I have a feeling that this book is going to be a standard in my weekly meal-planning. Not only are the recipes delicious and easy, they are infinitely adaptable. Highly recommended for delicious, one-dish, week-night cooking; simple enough to require little forethought, yet still creatively satisfying for the cook, and (most importantly) satiating all gustatory desires at the table. 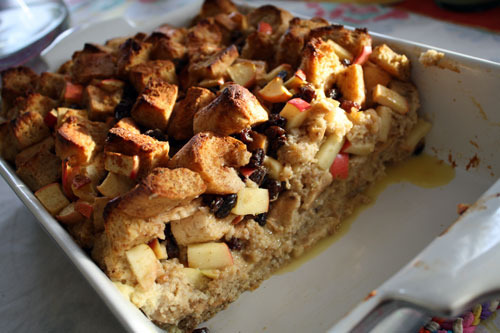 A strata is an easy and delicious take on bread pudding–but for breakfast. It’s less sweet than the rich baked dessert, but it also calls for a light custard of eggs and milk. This version relies more on fruit and spices for its sweetness and flavor; there isn’t very much sugar in it. (Erin notes: we cut the sugar in half and replaced it with honey and found it perfectly sweetened.)

Source: Not Your Mother’s Casseroles by Faith Durand